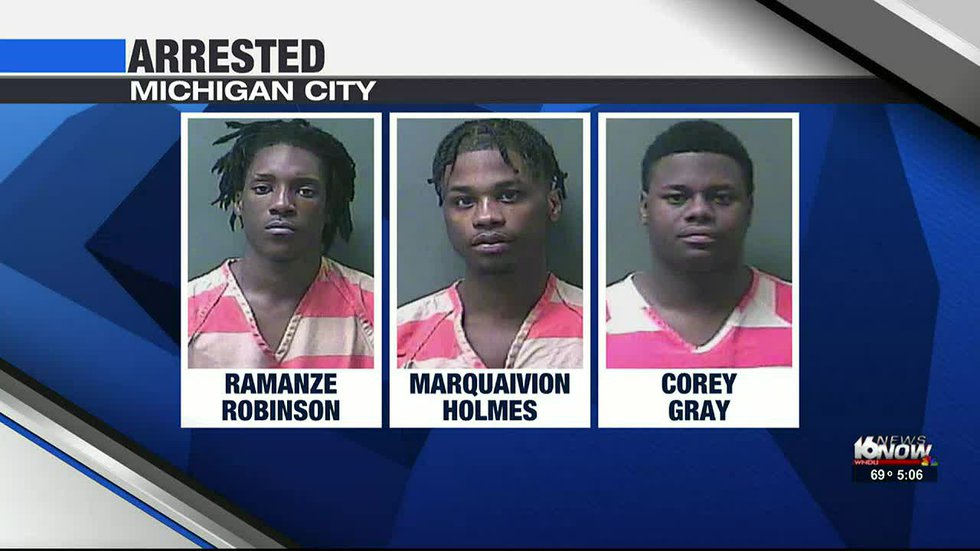 Police said on Friday, June 3, they saw a traffic violation for a Ford SUV on Barker Avenue near Cloud Street on a Ford SUV. They eventually stopped the vehicle in the 1300 block of E. Michigan Blvd.

Marquaivion Holmes, 19, Corey Gray, 20, both of Michigan City, and Ramanze Robinson, 20, of Chicago were arrested after police determined they were involved in an earlier armed robbery in that day, in which cash and a gun were stolen.

They are currently being held at LaPorte County Jail.

These arrests are part of the Michigan City Police Department’s larger efforts to overcome the recent increase in gun violence.

The Michigan City Police Department is continuing with additional VCR patrols to proactively combat a recent increase in gun violence in Michigan City. While conducting VCR patrols, officers seized four (4) handguns, drugs and made four (4) arrests over the weekend.

On Friday June 3, 2022, Constable Patrick Lewis, while conducting VCR patrols, observed a traffic violation on Barker Ave near Cloud St on a Ford SUV. After catching up with the vehicle in the 1300 block of E. Michigan Boulevard, a traffic stop was conducted and six (6) people were identified inside the vehicle. After further investigation, a search was conducted by officers and 4 handguns were found in the vehicle. One of the handguns located had previously been reported as stolen by the Michigan City Police Department.

When additional officers arrived on scene to assist with this investigation, it was determined that three (3) people in the vehicle were involved in an armed robbery that occurred earlier in the day, in which money and a gun were stolen. With the assistance of the LaPorte County District Attorney’s Office, formal charges were laid against 19-year-old Marquaivion Holmes, 20-year-old Corey Gray, both residents of Michigan City, and 20-year-old Ramanze Robinson of Chicago, IL. . All three subjects have been charged with Level 3 Armed Robbery and Level 6 Theft of a Firearm. Holmes, Gray and Robinson are currently being held in the LaPorte County Jail. All were scheduled to appear this morning in Superior Court #1.

A fourth subject, Rodney Rolland, 19, of Chicago, IL, was also arrested and charged with possession of marijuana, B-Misdemeanor. Robinson made his first appearance on June 6, 2022 in Superior Court #4.

The Michigan City Police Department would also like to thank the LaPorte County District Attorney’s Office and LaPorte County Superior Court Judge Jaime Oss #1 for their assistance in this investigation.

Chief Campbell applauds the efforts of his officers regarding this event. The teamwork, integrity and dedication of these officers continue to impact the fight against gun violence in our community. As we continue to strengthen our partnerships between the Michigan City Police Department, community members, and elected officials, we will continuously identify and address those responsible for unjust violence in our community.

We would also like to remind the public that you can contact us through Facebook Messenger, through our Crimes Hotline at 219-873-1488, or you can also call the WeTip General Crime Hotline (800) 78-CRIME and possibly receive a reward if arrested and convicted. All WeTip call information is sent directly to the LaPorte County District Attorney’s Office. You can always ask to remain anonymous!

Arrests and criminal charges are just charges. Everyone is presumed innocent until proven guilty by a court.