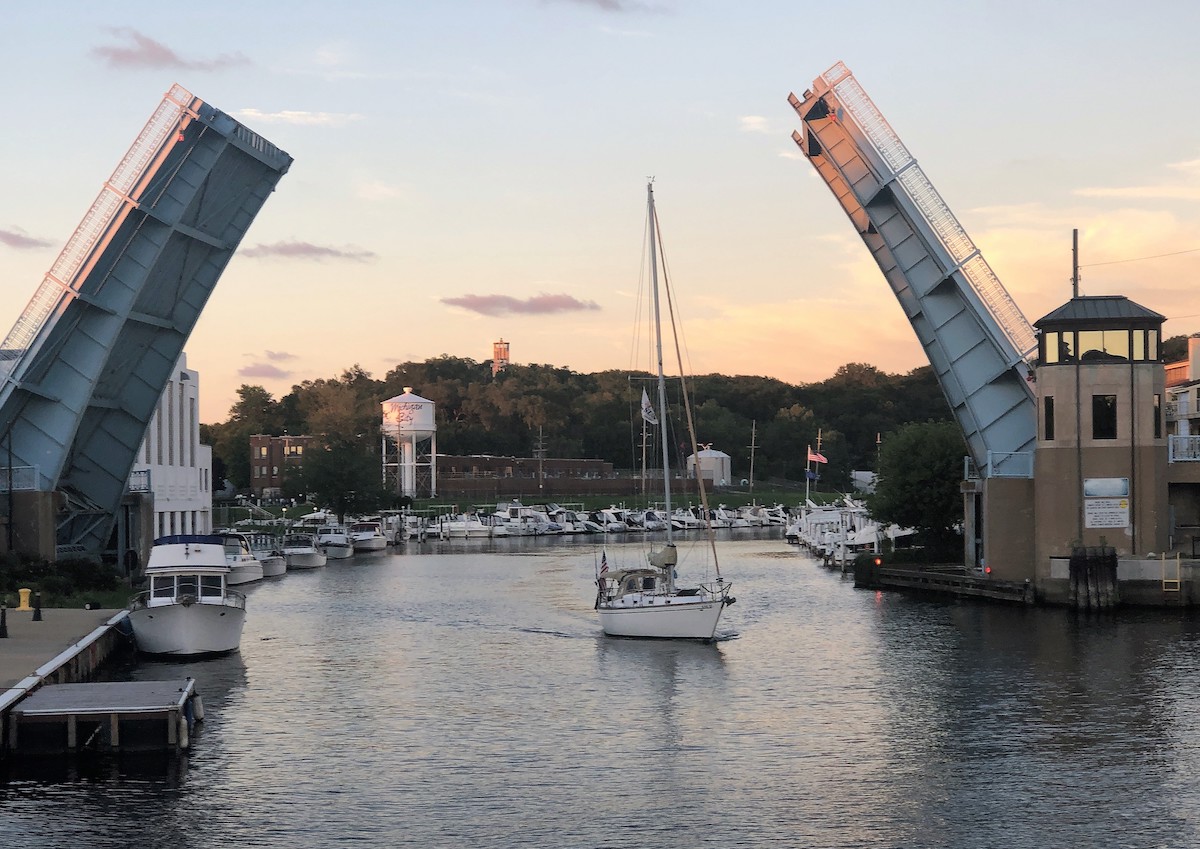 With miles of pristine beaches and towering sand dunes, Michigan City, Indiana is brimming with coastal charm. Add to these natural wonders a fascinating maritime history, a rich cultural arts scene and a diverse ecosystem, and you’ll find an upscale vacation destination steeped in Hoosier friendliness.

Michigan City, located in northwest Indiana on the southern shore of Lake Michigan, was founded in 1836. It quickly became an important commercial and transportation center for the Midwest. Railroads gradually replaced ships and barges as the preferred mode of transportation, but the city’s riverside setting positioned it perfectly for the tourist trade.

From my home base in suburban Chicago, I traveled frequently throughout Indiana. A recent media trip, however, allowed me to take a closer look at all that Michigan City has to offer its visitors. Read on for my personal recommendations.

The Indiana Dunes are a protected collection of huge sandy hills formed by retreating glaciers and shaped by wind and water. The area consists of a state park and a national park that stretch through forests, wetlands, and grasslands in addition to dunes. The American poet Carl Sandburg wrote in 1958: “The dunes are to the Midwest what the Grand Canyon is to Arizona and Yosemite is to California”. Millions of visitors each year would agree.

During Michigan City’s industrial days, much of the sand was transported for glassmaking. Preservation efforts began in the 1920s with the establishment of Indiana Dunes State Park. It’s the smaller of the two parks, with 3 miles of beach and 16 miles of hiking spread over 2,100 acres. Look for the “Tree Graveyard” where trees were covered and smothered by quicksand, then uncovered, along Trail 10.

Large tracts of land flanking the state park have been accumulated over decades and brought under federal protection. In 2019, the park was designated Indiana Dunes National Park, which has 25 miles of beach and 50 miles of trails within its 15,000 acres.

The park’s star attraction is Mount Baldy, a “wandering” sand dune that rises 125 feet high and moves inland about 5 feet each year. You can’t scale the dune due to hidden sinkholes and disturbance of fragile native vegetation, but park rangers offer guided hikes to the top several times during the summer.

Pro tip: Take the Mount Baldy Beach Trail for stunning views of the famous sand dune from the beach.

Within the national park is a group of five historic homes that were featured at the 1933 Chicago World’s Fair, officially named the Century of Progress International Exposition. The homes were built to feature futuristic amenities such as air conditioners and dishwashers and innovative building materials. They were moved by barge to the south shore of Lake Michigan and are being privately restored.

One house is a flamingo pink Art Deco style that merges indoor and outdoor living spaces. Another, clad in porcelain coated steel, was touted as “affordable”. Too bad we couldn’t get inside, but the exteriors are stunning.

Pro tip: An annual public tour of Century of Progress homes is sponsored by Indiana Landmarks each fall.

What to do in Michigan City

The 99-acre Washington Park is a community gem with 2 miles of soft-sand beaches to invite hours of sunbathing and water play. A long, elevated walkway on the west side leads to the picturesque East Pierhead Lighthouse. It is an icon of the city built in 1904 and still operational. The park also has a marina, hiking and biking trails, and the Washington Park Zoo.

Trail Creek derives from the lake and borders the plaza of Millennium Park. Take a walk on the wharf and you may see the Franklin Street Bridge going up and down to let the sailboats pass. Embark on a sunset cruise with Harbor Country Adventures. The double floor Emita II sails along Washington Park and down to the lake.

The 1858 lighthouse is now the former lighthouse museum with eight galleries illustrating the town’s long maritime history. You’ll notice that the museum, unlike most lighthouses, is a good distance from the water’s edge. This is because the ever-changing sands have created a new coastline further north. The beach moved; the lighthouse no.

As you walk through the museum, you’ll learn about Harriet Colfax, a lighthouse keeper for 43 years at a time when a woman in that role was rare, and the time President Abraham Lincoln’s funeral train passed through Michigan City. If you dare, climb the very narrow spiral staircase to the lantern room at the top for impressive views of the beach and Millennium Park.

I was curious to note an exhibit on the Eastland disaster. I knew about the overturned passenger ship that killed 844 people on the Chicago River in 1915. But what was the connection to Michigan City? Turns out that’s where Eastland was heading for a day of frolicking, but she never arrived. A heavy anchor chain fence around the museum has 844 links to commemorate the deaths.

A short walk from the lakeside is the Lubeznik Arts Center, where contemporary expression is celebrated. You’ll know you’ve come to the right place thanks to the modern exterior sculptures and curvilinear facade that winds its way up to the main entrance plaza. Admission is always free.

Within the low-rise, honey-hued brick building is a quintet of galleries for rotating exhibits, performance space for community cultural events, and classrooms for hands-on workshops and educational programs. Recent shows have featured acclaimed artists such as Andy Warhol and the Chicago Imagists, as well as the often thought-provoking and contemplative work of emerging creators. During my last visit, various works took root in the forgotten victims of a war on drugs in Jamaica and the quilts that may have been made with coded messages to lead enslaved people to freedom.

Pro tip: Linger at the Gallery Shop, which offers a tantalizing array of artisan-made fashion accessories and home décor.

Friendship Botanic Gardens is a spectacular collection of formal gardens, old growth forests and green spaces bisected by the winding Trail Creek, but it wasn’t always this way. Opened in the mid-1930s, the 100-acre botanical park was a regional gem until the 1960s. Then it was largely abandoned to decay and dense overgrowth.

Seven years ago, a small group of community activists launched an aggressive recovery campaign. They applied for — and received — improvement grants, and they solicited donations of time and money from local businesses, organizations, and nature enthusiasts. Their efforts are a huge success, and Friendship Botanic Gardens has been restored to stunning beauty whether you’re in the mood for a quiet retreat or a vigorous workout.

Within the park are 3 miles of paved walking paths, scenic Lake Lucerne with a Chinese arch bridge and gazebo, spherical lampposts, sculptures and statues, and a concert stage. Many formal gardens are themed, such as Scandinavian, African American, Persian, and children’s educational gardens. The newest facility is the Health and Wellness Garden, which is equipped with cardio and strength-training equipment.

Where to stay in Michigan City

You’ll find a huge selection of overnight accommodations in the Michigan City and South Shore area, so you’re sure to find something to suit your style. Here are two with a great atmosphere:

When traveling with friends or family, a short-term rental home keeps the gang together in a comfortable, private space. Beachwalk Vacation Rentals offers a wide range of options and sizes, each with a fun name. I stayed at “It’s A Wonderful Life”, a restored 1800’s house on a quiet residential street, steps from Washington Park and the beach. The three-level home features a fully equipped kitchen, living room, three bedrooms, and two and a half bathrooms. The laundry room is adjacent to the kitchen and parking is in the backyard.

Pro tip: Vacation rentals don’t always offer the same selection of toiletries as hotels. Ask ahead or bring your own soap and shampoo just in case.

If a rustic cabin in the woods is your nirvana, you’ll be charmed by The Brewery Lodge and Supper Club. A tree-lined road winds up to the boutique hotel, where 12 rooms offer serene views of the surrounding nature. Explore the waterways and wildlife or relax on one of the outdoor decks.

Built in 1930, the intimate, wood-paneled main building houses a restaurant and a craft beer and wine bar. Despite its name, the lodge does not have an on-site brewery but is owned by the same people as the town’s Zorn Brew Works restaurant and microbrewery. The lodge will arrange tours to local breweries, wineries and distilleries upon request.

Pro tip: The cozy restaurant is popular with locals, so make reservations.

To learn more about Indiana, explore these articles:

Can undocumented immigrants apply for a credit card?