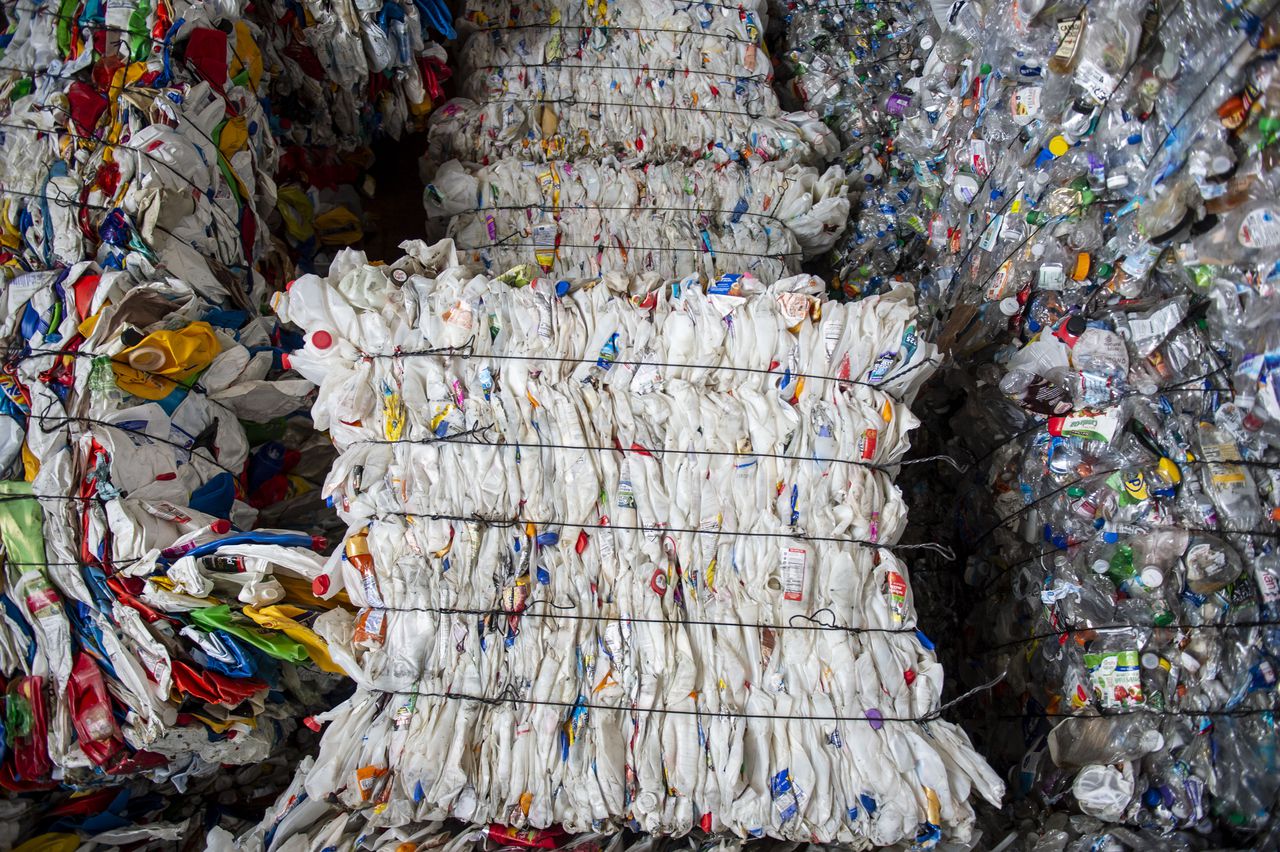 HARBOR SPRINGS, MI — It all started in 1990 with two recycling drop-off sites in the most northwest county at the tip of the Lower Peninsula, funded by a small two-year fee.

Today, Emmet County’s high-tech recycling program has become a million-dollar revenue stream for the community of some 33,000 residents, selling thousands of tons of recyclables to Michigan businesses. and the Great Lakes region to make new products. They even found a way to recycle plastic shopping bags.

Experts say the three-decade-old program in the north serves as a model for what a package of 8 bills pending in the state legislature could do to help Michigan counties find ways recycle more, landfill less waste and develop breakthroughs in growing circular. savings for recyclable materials and compostable organic materials.

“They have demonstrated that public investment in this type of infrastructure pays off – yields valuable public services, as well as 90% of the materials they collect through their recycling programs are actually sold to companies around the world. Michigan,” Kerrin said. O’Brien, executive director of the nonprofit Michigan Recycling Coalition.

Inside the Harbor Springs facility, a robotic arm rapidly sweeps a moving conveyor belt and rips off high-grade plastics, glass and aluminum, depositing them in sorted bins. The stream of mixed containers circulates again and again until the robot removes all recyclable items at a rate of 90 picks per minute; another line of materials in a separate room is where workers hand pick papers, boxes and bags from a moving conveyor belt.

The system is the culmination of years of investment in a program that serves a multi-county region and which officials say has built a local culture of active recycling in homes, businesses and public places.

Michigan’s statewide recycling rate lags much of the country at 19%, and increasing participation would ultimately reduce overall carbon emissions, moving closer to newly set climate goals. established by the state. Science shows that greenhouse gases such as carbon dioxide and methane trap heat in the atmosphere and lead to global warming and climate change.

Rules about what can be recycled in Michigan vary depending on whether communities or private companies set up programs and what materials they choose to accept. Some places only accept certain plastics, others only brown cardboard, and some communities offer no access to recycling.

The difference between recycling efforts in Emmet County and elsewhere in Michigan is a matter of longevity and investment in both recycling infrastructure and long-term relationships with companies that reuse materials. Latex paint, used mattresses and fluorescent light bulbs have even found new uses, officials said.

“The people at the time who were running Emmet County were very forward-thinking in trying to encourage recycling,” said Andi Tolzdorf, program director. “They put recycling into their solid waste management plan, so from the beginning, Emmet County intended to recycle.”

The Harbor Springs facility serves as both a waste transfer station through which waste is sent to a contracted landfill, as well as a dual-stream recycling center. A county ordinance requires all household trash to pass through the facility, and all trash haulers pay the same rate for landfilling trash.

“Recycling is free for residents. Garbage is not, so there is a natural incentive to recycle. So that in itself has really given residents a kind of reason to recycle — to buy for recycling,” Tolzdorf said.

Statistics show that in 2020, the facility processed 13,378 tons of recyclables which were baled and loaded into tractor-trailers, then shipped and sold to a list of businesses for use. The materials become jugs of laundry detergent, planters, water bottles, cereal boxes, and even toilet paper, among other new products.

Most of the companies that buy recycled raw materials from Emmet County are in Michigan or other parts of the Great Lakes region.

The aluminum goes to a scrap service in Gaylord; Plastics No 1 and 2 go to a company in Dundee to make plastic pellets later made into detergent and water bottles; paperboard and boxboard are destined for a kraft paper mill in the Upper Peninsula and a food packaging manufacturer in Kalamazoo, among others; cartons and paper cups go to a tissue manufacturer in Cheboygan; engine oil is re-refined at Saginaw; the glass goes to a Chicago-based company to make bottles, insulators and abrasives; electronic devices are sent to a dismantling center in Wisconsin; and more places for other materials.

Program organizers even managed to find a place in Virginia that buys truckloads of plastic bags and bales of film — a notoriously difficult material to manage because it can tangle sorting machines. Plastic bags are transformed into composite wood for decking.

Tolzdorf said they make sure everything Emmet County Recycling accepts “is recyclable and is recycled.” They don’t take anything that doesn’t have a strong market, which she says doesn’t mean polystyrene.

“It shows that the markets are definitely changing. They were very low in 2020; they’ve rebounded to a five-year high in 2021. So we can’t base all of our financials on the sale of recyclables, but when they’re good, they’re good and they carry us, and when they don’t are not sometimes the transfer station will have to transport us and transport our finances.

Tolzdorf said the robotic sorting machine added in 2020 increased labor efficiency by 60% and increased capture of recyclables by 11%. This led to several of the program’s temporary contract workers being hired into full-time jobs with county benefits.

A multi-year, bipartisan effort under the last and current administration to revamp Michigan’s solid waste laws resulted in a package of legislation designed to improve the recycling, composting, and reuse of materials. The bills passed the State House in the spring of 2021, but have since stalled in the Senate without any discussion or committee hearings.

Several state-generated reports have investigated the issue and estimate that Michigan residents collectively pay more than $1 billion each year to manage their waste. In this stream of household waste, $600 million worth of recyclable materials are lost to landfills each year.

Part of the pending legislation would require counties to update their existing solid waste management plans to modernized materials management plans, establishing recycling benchmarks and fostering regional collaboration for recycling and composting centers. sites. The state would provide grants for these planning efforts.

Liz Browne, director of the materials management division for the Michigan Department of Environment, Great Lakes and Energy, said Marquette and Emmet counties are good examples of regional efforts. to provide services. Other Michigan communities could also develop strong recycling and composting programs that would benefit both the economy and the environment, she said.

“Putting something back for reuse has less impact than starting with virgin materials. If we are successful in generating the materials in Michigan and having markets for them in Michigan, we will significantly reduce our transportation impacts,” Browne said.

Browne and O’Brien said some Michigan companies can’t get enough recycled raw materials within state lines. They have to buy these materials from other states and even from Canada.

Capturing more recyclables from the waste stream in Michigan would absolutely benefit companies that rely on purchasing post-consumer materials for their own productions, said Karl Hatopp, supply chain manager for TABB. Packaging Solutions, based in Dundee. He said Emmet County has been selling plastics from Operations Nos. 1 and 2 for 20 years, and they also began purchasing raw materials from recycling centers in Marquette and Ann Arbor.

Recyclable plastics are broken down into a type of post-consumer resin or “pellets,” Hatopp said, then sold to manufacturers in Westland, and others in Ohio and Illinois, where they are made into products like than jugs of laundry detergent and Absopure water. bottles.

“The more material we can sell (inside) Michigan, the better off we are,” he said. “If we could buy more in Michigan, we could buy less in, say, California, Texas or Winnipeg.”

The company works with other Dundee companies from the recycling industry. One is Clean Tech Incorporated, where Hatopp said he worked for decades.

Among the goals of the new MI Healthy Climate Plan are increasing recycling rates to at least 45% and halving food waste by 2030. These measures are among the ways the plan calls for the Michigan to achieve a carbon neutral economy by 2050. .

Michigan is overhauling garbage laws to promote composting and recycling