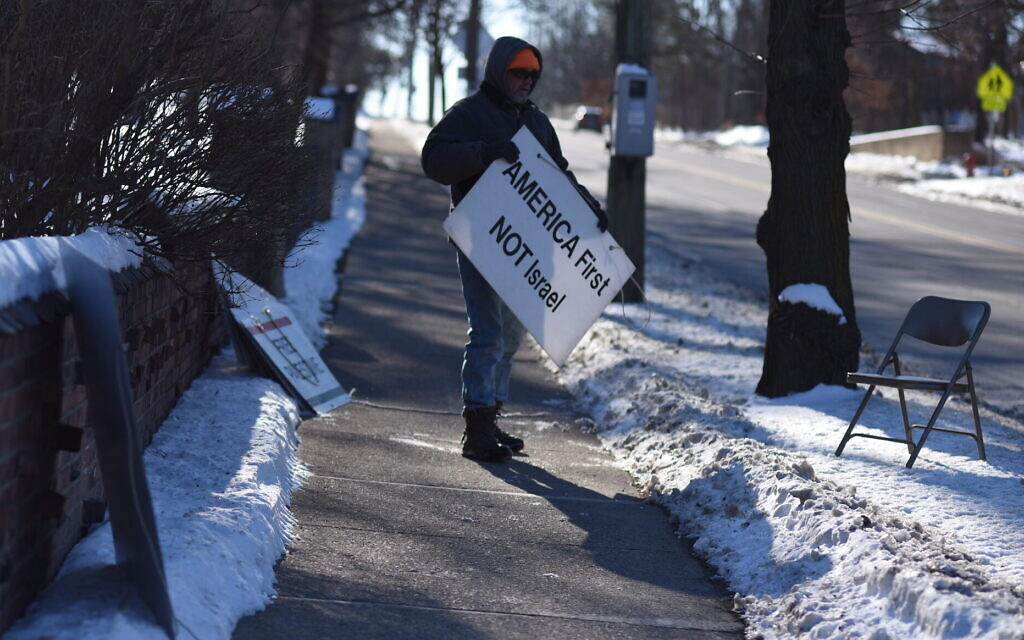 ANN ARBOR, Mich. (JTA) — For the past 18 years, a group of protesters have gathered outside one of this city’s synagogues every Saturday during Shabbat morning services, holding signs with slogans such as “Jewish Power Corrupts “.

This week, the Ann Arbor City Council for the first time issued a formal resolution condemning the protests as anti-Semitic.

The resolution responds to calls from members of the Beth Israel Congregation, a conservative synagogue a few blocks from the University of Michigan’s Hillel Center, as well as neighbors of the synagogue. They have called on the city for years to take decisive action against protesters, who they say target Jews at a place of worship and harass community members.

The protesters’ stated aim is to criticize Israel’s policies, but members of the group frequently bring anti-Semitic signs and chant anti-Semitic slogans. The group’s de facto leader, Henry Herskovitz, identifies as a former Jew and has propagated Holocaust denial and praised neo-Nazis in blog posts.

A worshiper, in addition to a local Holocaust survivor, sued protesters and the city in 2019, alleging that the protests violate First Amendment worshipers’ rights to practice their religion safely and that the city does not failed to enforce local ordinances that protesters are violating. That lawsuit was dismissed in September after the US Court of Appeals ruled that protesters had the right to speak freely to continue their activities.

For years, the city refused to get involved in what was happening on Washtenaw Avenue. That changed at Tuesday’s city council meeting, three days after a rabbi and his followers were taken hostage during services by an anti-Semitic attacker in Texas.

The council “further declares its support for Congregation Beth Israel, its guests, and all members of the Ann Arbor Jewish community, each having the right to pray, gather, and celebrate free from intimidation, harassment, and fear. violence”.

Congregation Beth Israel in Ann Arbor, Michigan has been the site of a weekly anti-Israel protest since 2003. (WIkimedia Commons via JTA)

“I was just thrilled,” Rabbi Beth Israel Nadav Caine told the Jewish Telegraphic Agency, noting that following the failure of the lawsuit that directly targeted the city, “it would be a lot easier not to do anything. say… I really thought it was bravery and an awareness on their part, that in this era, leaders have to speak out about the hate that happens to people who are not part of their group.

Caine had moved to Ann Arbor in 2018 after serving as a rabbi in Poway, Calif. — the site of a fatal 2019 anti-Semitic shooting at a Chabad home. Seeing the council’s resolution come just three days after the Colleyville, Texas synagogue hostage-taking, Caine said, “was the yin-yang of extreme emotions.”

The hostage-taking captured the world’s attention and renewed attention to anti-Semitic threats against Jewish places of worship. The rabbi held hostage in Texas, Charlie Cytron-Walker, is himself a graduate of the University of Michigan.

But the resolution, which did not mention events in Texas but referenced anti-Semitic signs seen on the U.S. Capitol during the Jan. 6, 2021 insurrection attempt, had actually been in the works for months, Caine said. Most notably, he said, it was led by the mayor of Ann Arbor himself.

“It doesn’t come from, say, ‘Jewish friends,'” Caine said, adding that he and the congregation were careful not to appear to fit the “Jewish stereotype of the person forcing my leaders to do something.” that they don’t want”. To do. In fact, that’s kind of what we’re accused of, that is, of using “Jewish power”.

Called for comment, Ann Arbor Mayor Christopher Taylor said he did not recall the resolution’s exact origins, but that it came out of “conversations” with the Ann Arbor Conference. He said the city issued a proclamation against the group in 2004, before he became mayor, but a 2021 resolution condemning anti-Asian harassment ‘resurfaced’ a desire to issue something more forcefully against this group.

Taylor has previously spoken out against the protests and visited the synagogue to apologize directly to congregants.

The protesters “express anti-Semitic tropes, they peddle a conspiracy, and their goal is to disrupt an innocent congregation,” he told JTA. “It’s totally inconsistent with Ann Arbor’s values, period.”

But, Taylor said, the city had little power to take further action against them. “People have the right to gather on public sidewalks and talk there,” he said. “We can’t intervene if anyone’s First Amendment law intervenes.”

Caine said Ann Arbor, a college town with a long history of progressive politics and left-wing social movements, tends to look the other way when Jews are targeted.

“We felt like, really — not just to me — Ann Arbor was no place for hate, except for hating Jews,” he said. 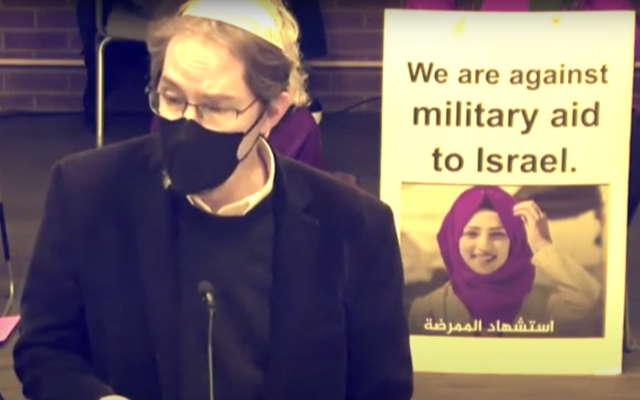 Rabbi Nadav Caine of Congregation Beth Israel in Ann Arbor speaks in support of a city council resolution condemning weekly protests outside his synagogue as anti-Semitic, while behind him another protester displays an anti-Israel sign, 18 January 2022. (Screenshot via JTA)

But the synagogue believed the city would take a stand, which is part of why Beth Israel refused to get involved in its own congregation’s lawsuit, Caine said.

“We had to consciously ask ourselves: ‘Is the city our enemy?’ “, did he declare. “We have to understand that they are not.”

Ann Arbor city council meetings have themselves been regular venues for local anti-Israel activists, who observers say often cross the line into anti-Semitism. Even at Tuesday’s meeting in which the resolution passed, a group during the public comment period held up an anti-Israel sign in front of the city council camera behind Caine; synagogue president Deborah Loewenberg Ball; and Eileen Freed, executive director of the Jewish Federation of Greater Ann Arbor, as they spoke in support of the resolution.

These Ann Arbor residents, who frequently push the city council to pass anti-Israel resolutions, also join forces with protesters at the Beth Israel Synagogue. Local anti-Israel campaigner, environmental toxicologist Mozhgan Savabieasfahani, recently declared her intention to run for city council after an unsuccessful 2020 run in which she singled out Jewish donors from her opponents in social media posts. .

While Caine expects protesters to continue with their weekly actions, he said the city’s statement will still be of great help to the congregation.

“When you enter the synagogue, there is a brochure explaining what is going on outside,” he said. “So what I can add now is, ‘I want you to know this doesn’t represent Ann Arbor'” – then, he said, he will quote the resolution.

What should you consider when considering getting a payday loan?