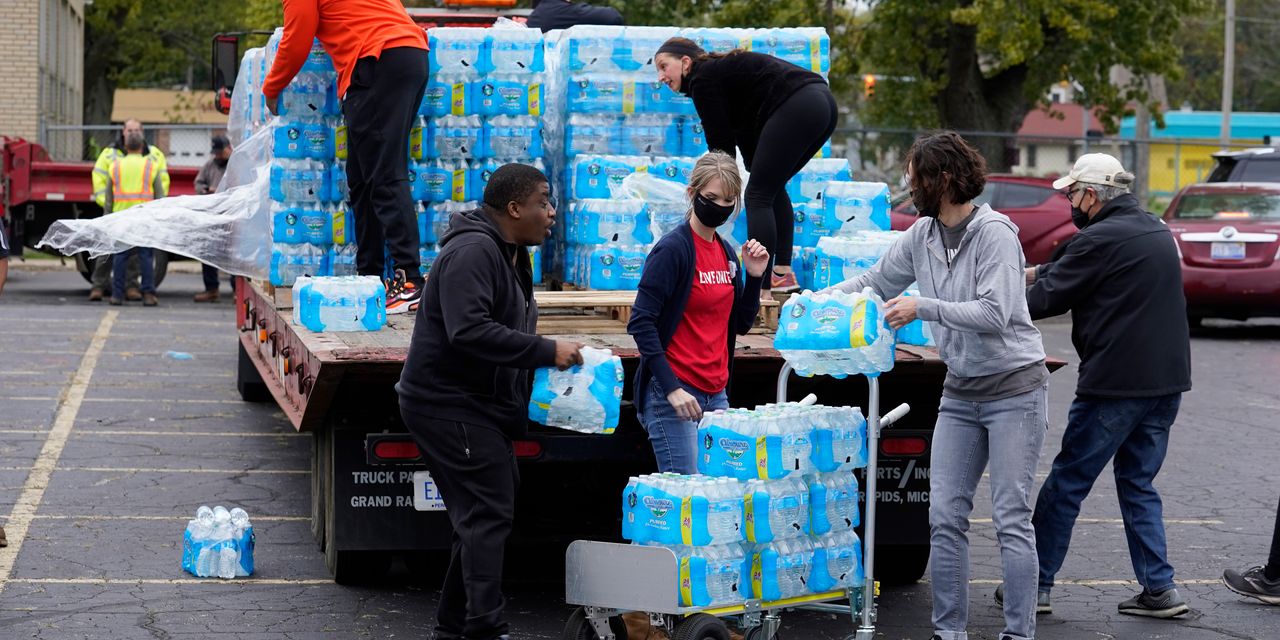 BENTON HARBOR, Mich. (AP) – Shortly after sunrise on a recent Saturday in Benton Harbor, Michigan, residents began lining up for free bottled water so they could drink and cook without fear the high levels of lead in city tap water.

Free water supplies are an integral part of life in the predominantly black city of southwest Michigan, where nearly half of the estimated 10,000 residents live below the poverty line. For three years, tests of its public water system revealed high levels of lead.

It takes time to wait for free bottled water, and some residents are wondering why, in a state that recently faced the Flint water crisis, the problem was not resolved sooner.

â€œI understand what Flint was going through, I really understand it,â€ she said.

Michigan Governor Gretchen Whitmer has pledged to spend millions of dollars to replace the city’s main service lines within 18 months – a breakneck pace for a process that often takes decades. For now, residents have been warned not to cook, drink or prepare formula with tap water.

Residents are concerned about what the high levels of lead mean for the health of their families. The problem is also embarrassing and stressful. Drivers line up early at water distribution sites, driving people away from work and families. Bottled water should be used with care so that it does not run out. Even queues have consequences – idling consumes gasoline that drivers have to pay to refuel more often.

Standing in line, LaKeena Crawford worried about the consequences for her 8-year-old daughter, who she saw trying to turn on the water.

“I’m like ‘No!’ Crawford said, adding that she wanted her daughter to understand that lead in water is dangerous. But, “I don’t want to scare him too much.”

Exposure to lead can slow cognitive development, especially in young children, according to the Centers for Disease Control and Prevention, and federal officials say no amount of lead in drinking water is considered safe for their consumption. In recent months, activists have pressed for more immediate and aggressive action, and the state has stepped up its response.

Some wonder if the problem would have been resolved more quickly if the residents of Benton Harbor were more like those of neighboring, predominantly white St. Joseph.

â€œSometimes it’s enough to speak out against racism, and that’s what it feels like,â€ said Ambie Bell, helping distribute water to residents.

There are millions of aging underground lead lines connecting buildings to water pipes across the country, mostly in the Midwest, but also scattered across other states like New Jersey and Massachusetts. Old pipes can become an urgent risk to public health. Newark, New Jersey, experienced prolonged lead water problems which led to the rapid replacement of thousands of lead pipes. The high test results in Clarksburg, West Virginia, sounded the alarm earlier this year. The word Flint is now synonymous with lead water problems.

Digging up and replacing lead service lines is costly, straining tight local budgets. Infrastructure and reconciliation bills pending in Congress include billions to deal with leadline replacement which activists say could make a significant difference.

The lead water problem in Flint began when this town switched its water source to the Flint River as a temporary saving measure without proper treatment, corroding its lead pipes. But Benton Harbor’s water source, Lake Michigan, is considered safe and many other places find their water there, said City Manager Ellis Mitchell.

â€œOur problem is clearly our own infrastructure,â€ he said.

On Tuesday, the Environmental Protection Agency identified a series of violations at the Benton Harbor water facility. Federal inspection has found problems so serious that the city must consider relinquishing ownership, the EPA said.

“The people of Benton Harbor have suffered for too long,” EPA administrator Michael Regan said in a statement.

Water systems sometimes produce high test results, but in Benton Harbor authorities have been unable to bring them down. The long-term solution is to replace the roughly 2,400 pipes that may contain lead, state officials said.

â€œThis results in a ripple effect of reduced technical, managerial and financial capacity at the water plant due to underinvestment in personnel, equipment and training,â€ said Scott Dean, Door -speaking of the Michigan Department of the Environment, Great Lakes and Energy.

After the Flint water crisis, Michigan tightened requirements for lead in drinking water in 2018, boasting that it passed the most protective law in the country. He imposed more stringent requirements for testing water for lead and demanded that old lead service lines be replaced.

Environmental groups and local activists filed a petition on Benton Harbor in September with the EPA, calling for aggressive action. Reverend Edward Pinkney, an activist named on the petition, said if they had not filed a request, an aggressive official response might have taken even longer.

The Michigan House of Representatives oversight committee held a hearing last month on Benton Harbor. Republican Committee Chairman Steven Johnson asked why the state’s recent response to the city’s main crisis makes it appear to have gone “from zero to 100 miles an hour” even though the problem has persisted for years.

Michigan officials say they have taken the issue seriously.

In 2019, local authorities offered Benton Harbor residents filters designed to reduce the amount of lead in drinking water. Eric Oswald, director of the state’s drinking water division, told the hearing that federal officials are studying the filters to make sure they are working properly. They also worked on controlling corrosion to reduce the amount of lead that enters drinking water through pipes. While the overall lead sampling results are still too high, the proportion of high readings has declined, officials said.

Additionally, outreach efforts from 2018 have included town halls, engagement with the local press, and public notices, officials said. Inspectors, however, hit the city for failing to notify water customers in their water bills of the problem over a one-year period.

Dr Mona Hanna-Attisha is a pediatrician and professor at Michigan State University who sounded the alarm bells about Flint. She receives questions from parents to find out if a developmental problem could be related to lead in the water. However, it is extremely difficult to establish a direct link between an individual’s health problem and lead in water.

“This is why lead poisoning has eluded diagnosis, treatment and prevention for so long,” she said, adding that lead exposure is not safe for children and that ‘It’s too early to predict what the long-term impact might be. Lead levels can vary among households, and individuals may respond to exposure differently. The impact may also depend on other factors like poverty, which makes it particularly important to tackle the problem in cities like Benton Harbor, she said.

Marc A. Edwards, a professor at Virginia Tech who specializes in water treatment, said the focus on Benton Harbor highlights a national problem with cities struggling with high lead levels. He said major water crises like Flint erode public confidence in the official management of water systems.

Sylvester Bownes, who wears a prosthetic right leg, said he had been drinking bottled water for years because he didn’t trust the water in Benton Harbor.

Pushing a makeshift cart full of several cases of bottled water half a mile from his home, he said a broken water pipe temporarily cut off the public water supply, so no running water, he not only needed bottled water for drinking, but for basic needs like filling his toilet.

Residents confined to their homes can call a hotline for water, but Bownes said the process is taking too long and is unreliable. State officials said hundreds of people have been added to a list of weekly deliveries. If there are any issues, residents should report them, they said.

Mitchell, the city manager, said last month that customers are charged for water which authorities say can still be used for tasks such as laundry and washing up. He said the city was looking to see if there was any kind of relief about it.

Greg Johnson, who was the first to stop around 8:15 a.m., said he arrived early so his family’s supplies could be replenished for his daughters, aged 8 and 11.

â€œIt takes two cases in the morning to get them ready for school,â€ he said. â€œThey have to wash up and stuff. It’s a bit hectic. “