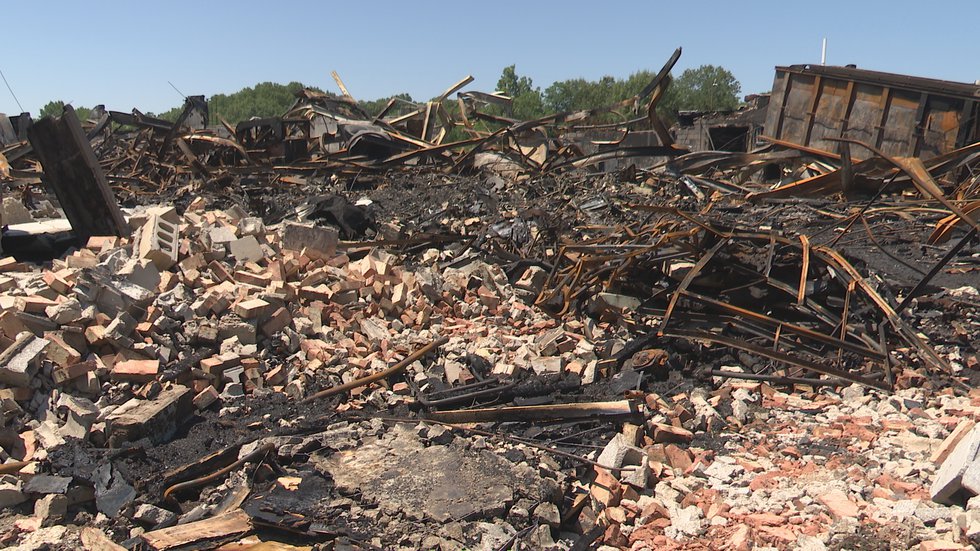 The company that occupies the building is Mikropor, a Turkish air filter supplier that bases its US operations in Michigan City.

Mikropor and its warehouse have been victims of frequent vandalism in recent months.

“There was a burglary here where they broke into the building and ransacked Mikropor,” property manager Ed Bohle said. “Mikropor had boxes of filters, quite a few of them. They took a loader and rammed it into the wall. They took a forklift and rammed it through another wall, then lowered the rows of boxes and knocked them down the middle aisle so it was a mess you couldn’t even get through there.

Over a quarter of a million dollars in damage was done to the building and its inventory two weeks ago by vandals. On Saturday, the flames destroyed more than $1 million worth of produce.

State and local fire marshals were at the former Pullman factory today, beginning the investigation into the cause of this massive warehouse fire.

“Obviously there’s a lot of damage inside,” Michigan City Fire Marshal Jeff Bruder said. “We will do our best to see how far we can go with our investigation. We enlisted the help of the Indiana Department of Homeland Security, and he (Indiana State Fire Marshal Investigator Jeff Roseboom) is coming to help me with this, so we’ll just take it piece by piece. As far as we can get in safely, that’s what we’ll do, do our best to determine the cause.

They tell us they are looking for any evidence that might determine the cause, but ask residents not to rush to conclusions about what caused the fire.

“Between social media and several local residents, there are a lot of innuendos and accusations floating around,” Michigan City Mayor Duane Parry said. “We have no idea what caused the fire until we investigate. If there are any indications of criminal activity, we will investigate further. We will resolve this. We will investigate until we determine all aspects surrounding the fire, and we will take appropriate action, whatever the case.”

Mayor Parry says the city will discuss using U.S. bailout funds to help Mikropor, the business affected by that fire, help rebuild what was lost. Despite the extensive damage caused by the fire, officials say the building is salvageable.

Stick with 16 News Now as we continue to follow this developing story.