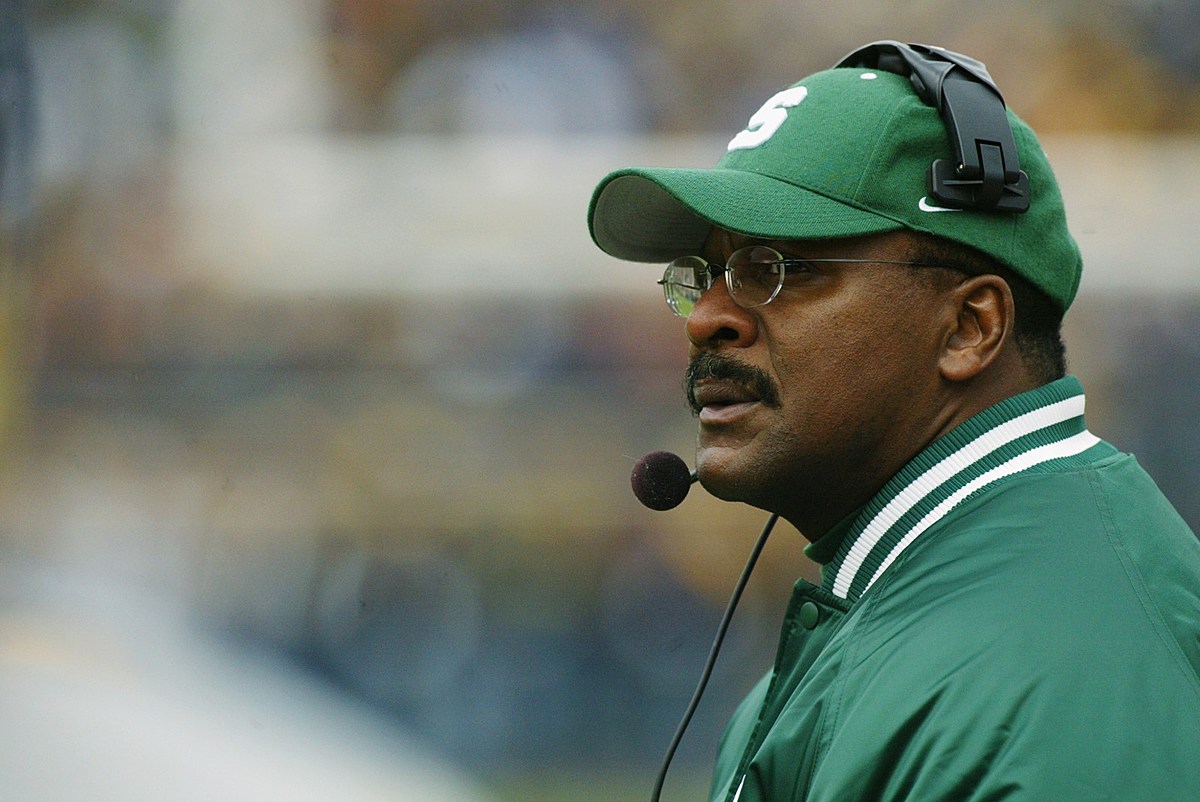 Is it 2002 again for Michigan State football?

Spartan fans, you remember the 2002 season, right? It was the season of high expectations. Lots of hype. You had junior QB Jeff Smoker in charge with All-American wide receiver Charles Rogers as your primary target. And head coach Bobby Williams (pictured above) is entering his third season at the helm.

A lot of people had Rose Bowl aspirations for this season, but if you’re old enough to remember that, it completely crumbled on them. They finished 4-8 and Coach Williams was fired after a crushing 49-3 loss at Michigan.

Remember when Williams was asked after that game if he lost Fox Sports Detroit’s Mickey York team, and he said “I don’t know.”? That comment sealed his fate and he was fired by then-AD Ron Mason two days later.

Well, if MSU loses next Saturday to Maryland on the road (and the Terrapins are the game favorites), you have to ask the question in the title: is 2002 again for MSU football?

For argument’s sake, let’s say they lose to Maryland. That puts them at 2-3 (0-2 in the Big Ten). Next, they have THE Ohio State Buckeyes coming to town on October 8th. The way State is playing right now, they’re not winning this game! So that’s 2-4. And then the return match switches on October 15 against Wisconsin. You also can’t rule that out as a possible loss given their struggles on defense. Ok, let’s say they lose, so 2-5.

Which brings us to Michigan after the October 29 bye week in Ann Arbor. Wolverines have said publicly that they’re taking this game more seriously this year, considering they’ve lost the last two years to State. Well, if they do, they should win that one (based on what we’ve seen so far). So it’s 2-6 for the Spartans.

After that, it’s a road game in Illinois. Then they’re home to Rutgers and Indiana. Finally, they close out the regular season at Penn State. Will State have something emotional for these games if they are 2-6? Will it even matter then? We will see. But another 4-8 is possible, and that was unthinkable six weeks ago.

You remember how the team fell apart in 2002 after there were high expectations (some say it was MSU Football’s worst season). If they lose to Maryland on Saturday, will the same thing happen again? We wonder out loud…

Also, let’s be clear… Mel Tucker will NOT be fired (like Bobby Williams did) if State goes 4-8. This is NOT happening, nor am I advocating for this to happen if the bottom drops. I know it’s a matter of opinion, technically, but it’s not going to happen in 2022 for a variety of reasons. I might write about this at a later date if the bottom really drops.

KEEP READING: Here are 50 of the most famous sports gaffes