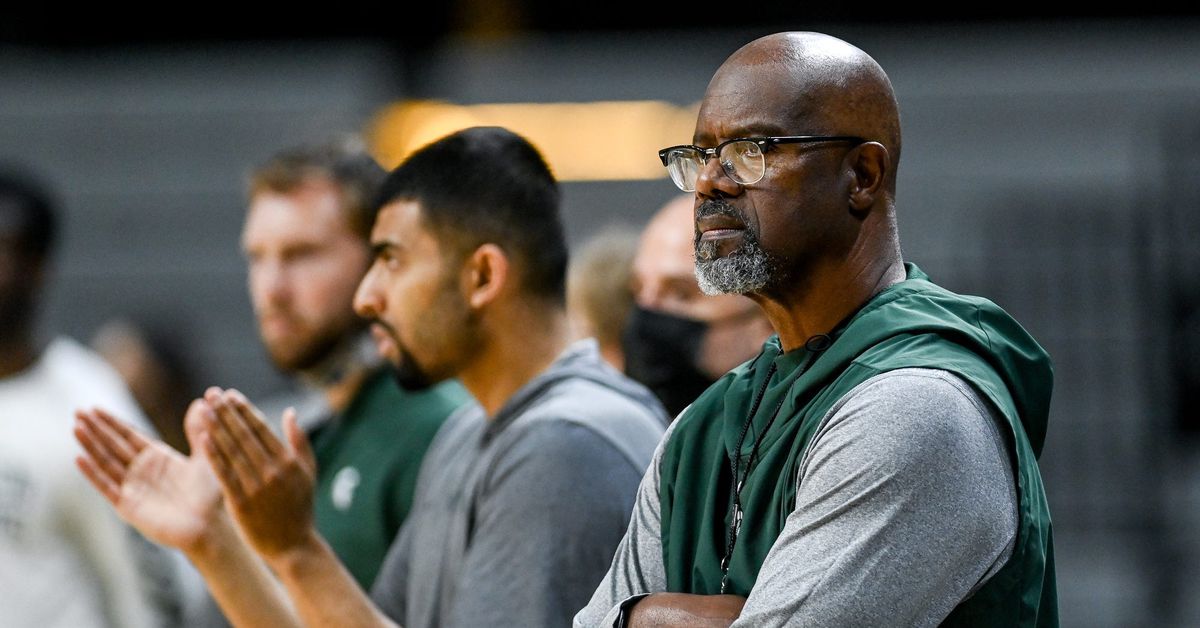 The Michigan State Men’s Basketball Team is getting closer and closer to kicking off its 2021-22 season. As the team began training in late September, exhibition games begin Wednesday, October 27 against Ferris State, and finally, the regular season kicks off Tuesday, November 9 against Kansas at Madison Square Garden in New York City.

That said, Michigan State Basketball Head Coach Tom Izzo spoke at MSU’s media day earlier this week and gave numerous updates on the development of the team. In terms of training and development, strength and conditioning of players, Izzo says the team has had “their best summer in 10 years”.

Izzo calls his team ‘egoless’ and also said that apart from training after Izzone’s camp last weekend, the team have been very focused and have trained to a high standard.

“We’ve had a good few weeks of training,” said Izzo. “I thought (we had) a bad practice, last Friday we let the folks at Izzone Campout in and I don’t think we handled that very well. Other than that I think we were at a very, very high level.

One of the most interesting things Izzo mentioned is a bit of a shuffle with the staff. Longtime assistant coach Mike Garland – entering his 22nd season at Michigan State – is transitioning to a new role of “special assistant” to the head coach, according to Izzo.

Garland and Izzo are great friends and were teammates at the University of Northern Michigan in the 1970s. Since joining the Izzo team in 1996, Garland has been with the Spartans every year outside of a four-year stint spanning the 2003-2004 season to the 2006-2007 season – which included a three-year stint as head coach at Cleveland State and one year as an assistant coach at SMU. He was then rehired at MSU by Izzo for the 2007-2008 campaign.

While Garland’s new role will include movie distribution, strategy, and general day-to-day basketball operations, he will now focus on player development and mental health. He will also have responsibilities for coordinating recruiting on campus, but will not be on the road recruiting as often. Garland had to take a little time off during the 2019-20 season when his son, Ray, underwent heart surgery. Garland’s new role allows him to get off the road and hopefully spend more time with his family.

“When I say ‘special assistant’, (I mean) he’s a special guy to me,” Izzo said of Garland.

With Garland’s transition to this role, that means the three full-time field assistants for Izzo this season will now be Dwayne Stephens, Doug Wojcik and Mark Montgomery – who was originally hired to be the recruiting coordinator. In addition, former players Matt McQuaid (director of basketball operations) and Austin Thornton (video coordinator) are on staff.

In other news, Izzo also mentioned that second-year guard Davis Smith, who joined the squad for the 2020-2021 season, has been awarded a scholarship. The state of Michigan still has an open stock exchange.

The state of Michigan confirmed Friday that it will host Western Michigan at the Breslin Center on Friday, November 12 at 6:30 p.m. EST. The game will be broadcast on the Big Ten Network.

CONFIRMED: Our game against Western Michigan will switch at 6:30 p.m. ET on Friday, November 12 and will be televised on BTN. pic.twitter.com/qTBxQKscXi

Senior forward and captain Gabe Brown: “I’m ready to start (the season). We had a great summer. We have a lot of team camaraderie – we all hang out with each other, we all do everything with each other. Right now, I can’t wait to go and play with (my teammates). Next week is the start, so I can’t wait.

Junior forward and captain Malik Hall: “I’m still getting used to being someone who always has to talk and who always has to encourage some of the younger ones. (Being a captain) is something I wanted, but also (the vocal part) is something I’ve been working on all summer. It’s definitely a challenge for me (being the vocal leader). Naturally, I am a little more calm and reserved in these situations. But it’s something that I’ve been able to work on a lot and something that Coach (Izzo) helps me a lot on.

We have videos from the full press conference below, with comments from Izzo, Christie, Brown and Hall: