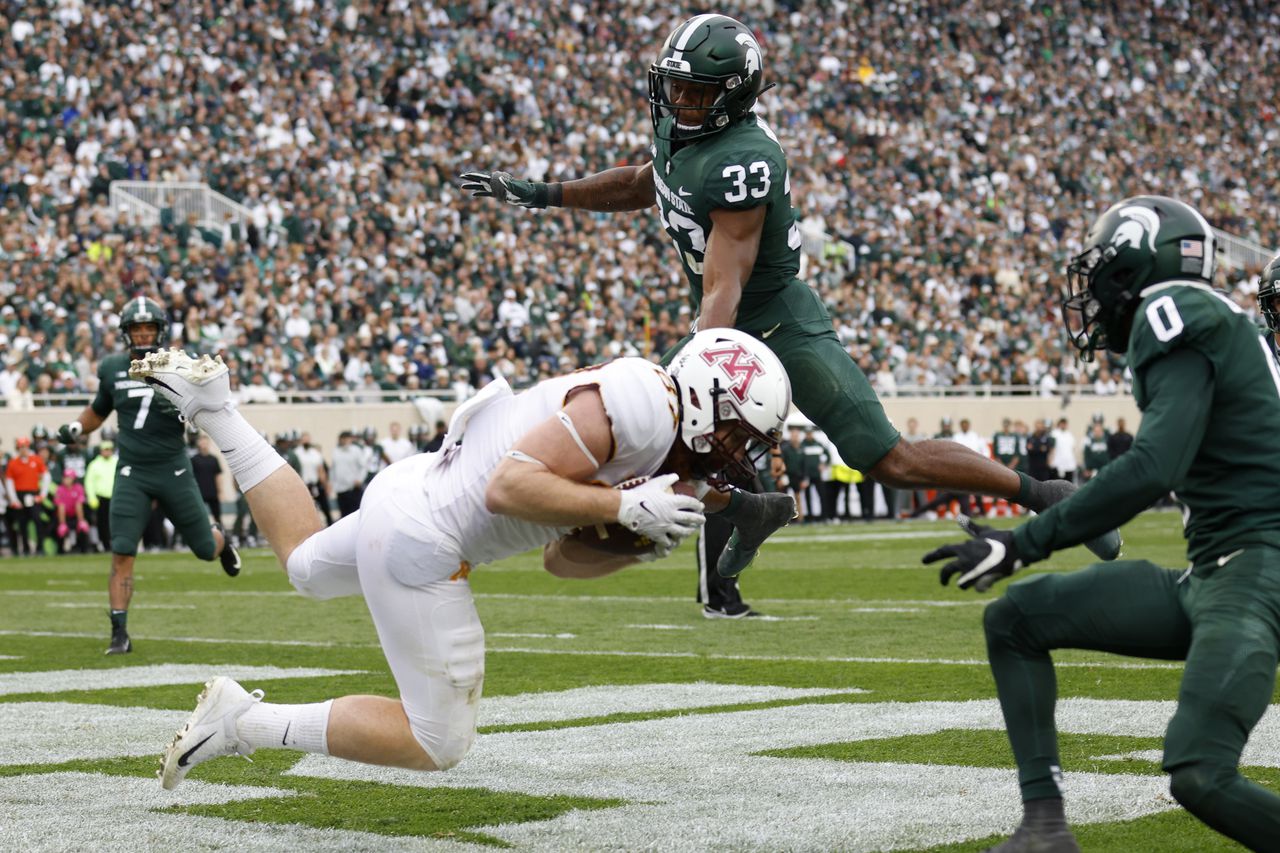 EAST LANSING — The last non-conference game was a loss for Michigan State.

The Big Ten opener seven days later was another humiliating loss for the Spartans.

Here are the takeaways and observations from the game:

* The loss to Washington was ugly. Saturday was embarrassing for the Spartans.

Michigan State was dominated in every possible way by Minnesota. Was there a single positive for the Spartans to take from the game? Well, punter Bryce Baringer had another solid game, but the Golden Gophers didn’t have a single punt, which was far from an advantage for the home team.

Given that Minnesota picked up a trio of victories against unequal competition in non-conference play to start the season, it was unclear just how much a team coach PJ Fleck had come to East Lansing. Maybe the Golden Gophers will win the Big Ten West Division, maybe not. But they completely dominated Michigan State from the start and imposed their will with little resistance.

Michigan State far exceeded outside expectations last year starting 8-0, remaining in the hunt for a Big Ten title and a berth in the college football playoffs through late November. then winning the Peach Bowl to finish 11-2. The Spartans entered this season with higher goals that can pretty much be thrown away right now with a .500 record and an 0-1 start to the Big Ten.

It didn’t take long for Michigan State fans to start booing on Saturday and there was very little to cheer for. With a tough schedule ahead, it could be a long and difficult season for Coach Mel Tucker and the team just to become bowling eligible. The first third of the season couldn’t have been worse.

* Getting back to zero punting for Minnesota – Michigan State’s defense is a mess. The secondary was on display again in the loss to Washington and Saturday didn’t look any better. Tanner Morgan completed 23 of 26 throws for 268 yards, three touchdowns and no interceptions. More open receivers, more linebackers and defensive backs beaten into coverage, more questions than answers. Still no interceptions for the Michigan State defense in four games.

Minnesota went 10 for 12 on third down and only really stopped with a first-half fumble. The Golden Gophers might have been able to score 50 points had they tried, but the way they won was even more dominant. They did what they wanted offensively and chewed time on the clock. Minnesota’s dominance in time of possession — 42:30 to 5:30 — was about as ugly a stat as it got on a busy night with them.

After the game, Tucker – as expected – said he had faith in his staff and should rewatch the film to see if the defensive issues were scheme-based or staff-based, but he had an idea of ​​the problem. . Something has to change for the results to be different.

Nickelback Chester Kimbrough was replaced in the starting lineup by Justin White on Saturday, but he also struggled and wasn’t alone as cornerbacks and safeties were battered. Safety Kendell Brooks finished with a career-high 18 tackles — the most for a Spartan since 19 by Eric Smith posted 19 in the 2004 loss to Notre Dame — which says a lot about how long the defense passed on the ground.

There were some interesting comments from defensive end Jacoby Windmon. He said the Spartans expected Minnesota to focus on the ground game and didn’t expect Morgan to be a threat with his legs. Well, the Golden Gophers went to the pass early with ease and Morgan has three carries for 27 yards — all third runs that moved the chains. Not a great look for defensive personnel.

* After missing the loss at Washington with a reported back injury, top receiver Jayden Reed returned to the lineup on Saturday. However, Michigan State continues to be plagued with injuries early in the season, especially on defense.

Four defensive starters from the start of the year weren’t in the lineup against Minnesota. Safety Xavier Henderson missed his third straight game with a right leg injury, defensive tackle Jacob Slade was out for the second straight week and defensive end Jeff Pietrowski did not play after being injured in the first quarter in Washington. Linebacker Darius Snow suffered a season-ending injury in the season opener.

There were also numerous players who left the game for Michigan State, including defensive end Khris Bogle. The Florida transfer made his first career start with the Spartans, but was out with an apparent leg injury in the first half, didn’t return and Tucker didn’t get a suspension. day on his status after the defeat. Defensive tackles Simeon Barrow and Maverick Hansen were both beaten on Saturday.

* In the first two games, Michigan State led the nation with 12 sacks and Windmon was first with 5.5. Those totals came against Western Michigan and Akron and the Spartans have been zero ever since.

Defensive end Brandon Wright got to Morgan for a sack, but that was wiped out for a facemask penalty after ripping off his helmet. Windmon forced a fumble on Ibrahim – his fifth forced fumble of the season – but he and the rest of the defense failed to generate a pass rush. The Spartans struggle to defend the pass and the lack of pressure obviously doesn’t help.

* A week after falling 22-0 in Washington, Michigan State dug another early hole. Minnesota scored touchdowns on its first two possessions for a 14-0 first-quarter lead and took a 17-0 halftime advantage.

These are back-to-back games where the Spartans faced a big deficit early on and that’s obviously not a recipe for winning in football. The blame lies with both sides of the ball, but they need to get off to a better start if they are to have any chance of success.

Heard outside the Michigan State locker room: Not much to say and take one on the chin

The first quarter numbers were absurd. Minnesota had dominant advantages in total yards (169-1), first downs (10-0), total plays (21-6) and time of possession (11:40-3:20). It was the second straight game that Michigan State has gone just six games in the first quarter.

* Over the course of two games, Michigan State’s running game has been solid while relying on a pair of offseason running back transfer additions in Jalen Berger and Jarek Broussard. The last two weeks have been a big step backwards.

The Spartans finished with 14 carries for 38 yards while posting the lowest total since Tucker took over the program in 2020 for the second straight game. Broussard had six carries for 23 yards and Berger four carries for 13 yards.

It was not a good day for the backs or the offensive line. For a team intent on setting the tone on the pitch, there are huge concerns going forward.

* With a tough running game and a big deficit on the road, quarterback Payton Thorne fought back and made plays in Washington. The redshirt junior couldn’t capitalize on that outing against Minnesota.

Thorne was 17 for 24 passes for 132 yards, zero touchdowns, two interceptions and a fumble in the red zone. In four games, Thorne has seven touchdowns and six interceptions and didn’t throw his sixth pick until Game 8 last year. He attempted to force a fourth pitch to catcher Keon Coleman which was caught and also intercepted on a screen pass.

Three turnovers from the starting quarterback and zero points while he’s on the field obviously won’t be enough. Backup Noah Kim replaced Thorne late in the fourth quarter and went 6-for-7 for 70 yards, including a 27-yard touchdown to true freshman receiver Germie Bernard with 17 seconds left.

Jayden Reed back in uniform for Michigan State while fellow starters vs. Minnesota

The pressure is on Scottie Hazelton, the Michigan State defense in the opening of the Big Ten stretch