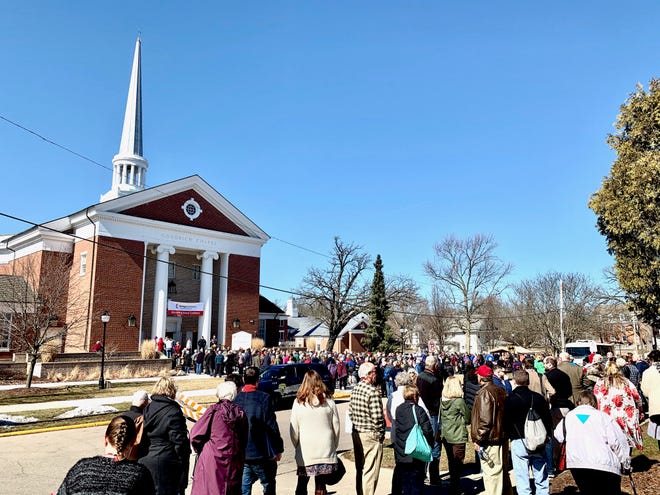 Feelings of uncertainty, deep division and sadness filled the shrine at Goodrich Chapel in Albion on Saturday, but one thing everyone could agree on was that those in the room were family.

Like many families, The United Methodist Church is caught up in a culture war, and the fight has at times been terrible.

After decades of polarizing debate over the role of LGBTQ people in the church, many in the denomination feel there is no way to heal the division.

“We can no longer live in limbo,” said Andrea Johnson, minister of the Convis Union United Methodist Church in Battle Creek. “It’s a struggle because there is a relationship … You’re going to lose people along the way, but we’re innovating.”

The plan was passed overwhelmingly, with 91% of the conference voting yes.

“I wish I didn’t have to vote anyway,” said Zelphia Mobley, minister at Old Mission Pennisula United Methodist Church in Traverse City, who said she wished the denomination could find another way forward. .

The conference was one of three held around the world to review the plan, known as the Protocol of Reconciliation and Grace through Separation and Restructuring.

“We have come to a place, and it is a place that brings me some sadness, that we have realized that we really cannot move forward as a single denomination,” said Bishop David Bard, who oversees United Methodist churches in the Michigan area. .

Despite the sadness, Bard and many other Methodists hope the church will be able to demonstrate a way to overcome divisions with kindness and understanding.

“One of the ways the church can best testify that there is something we need through the culture at large is to find better ways to have really difficult conversations,” Bard said. .

The separation plan, which was announced in January, would create at least one new traditionalist Methodist denomination that would maintain the church’s current bans on ordination of LGBTQ clergy and on same-sex marriage. Churches that do not leave the denomination, which would likely include many Methodist churches in the United States, would take a more open stance on LGBTQ issues.

The United Methodist Church is the second-largest Protestant denomination in the country and approximately half of the approximately 13 million Church members worldwide reside in the United States.

â€œThe whole world will be looking into the Methodist Church to see what’s going on in Michigan,â€ said Mark Doyal, Michigan Conference communications director for the United Methodist Church. “This will be an important time for the denomination to attend this world conference.”

Two other conferences voted on the plan, one in the Philippines and one in Sierra Leone. Albion’s meeting is the only one in the United States.

â€œI think the reason this meeting in Michigan is important is that it will provide insight into how US conferences view protocol,â€ Doyal said.

Bard was invited to call an annual conference in mid-January by a member of the negotiating team who worked out the separation plan.

â€œI think Michigan is seen as a well-functioning conference, so I was very happy that we were able to do that,â€ Bard said.

Other conference areas were also asked to call a meeting, Bard said, but in the end Michigan was the only conference that could host.

“I think that maybe says a lot about the quality of our leadership,” he said. “We have worked hard to find common ground on a number of things, and there are people with very different views who supported the idea of â€‹â€‹this special session.”

Bard’s reputation within the denomination as someone who has navigated the sometimes emotional and turbulent conflict in a balanced manner was also likely a factor in Michigan’s selection.

â€œI think they saw Michigan as a place where protocol legislation would have a fair and balanced opportunity to proceed,â€ Doyle said.

A separation has been brewing for some time, but the conflict came to a head after a controversial general conference in St. Louis in February 2019. At that meeting, 53% of church leaders and lay members in attendance voted to strengthen restrictions on LGBTQ members. and reaffirmed the church’s position that “the practice of homosexuality is incompatible with Christian teaching”.

After the conference, many United Methodist conferences in the United States adopted statements saying they would not support the church’s position.

Richard Youells, a retired minister from Grand Rapids, said he was not surprised by the outcome but had mixed emotions.

At Michigan’s annual conference in June 2019, delegates endorsed an ambitious declaration â€œto live in an expression of Methodism that includes LGBTQIA people in life and full membershipâ€.

The United Methodist Church is just the latest denomination to confront the role of LGBTQ members and the clergy. Similar debates took place in Presbyterian and Episcopal churches, and similar debates raged among young Evangelicals and Catholics.

As the division in the Methodist Church focuses on the role of LGBTQ people, the heart of the conflict runs deeper, Doyal said, and reflects the polarization seen in the culture at large.

The issues at the heart of the Methodist divide are not just about politics, Bard said, but the political atmosphere and the way people have conversations online and in the culture at large have influenced the church.

â€œWe seem to go pretty quickly from conversation to heated debate to angry rhetoric,â€ Bard said. “This kind of polarization that exists in the country affects all kinds of conversations, I think. And I think it’s unfortunate, but I think it has affected the way we can have this conversation in the church.”

The hope is that this moment in the Methodist church will show a way forward for the church and ultimately the country, Bard said, finding a way to disagree with kindness and grace.

“I think if we are able to do that, it will be, in a way, a testament to society at large that more kindness is possible. That we can find ways to disagree that are more pleasant, â€he said. “That, for me, would be powerful.”